We are reopening towards the end of October.......

We can now announce that the David Lean Cinema will reopen on Tuesday 26 October. There will be film performances in the afternoon and evening of Tuesday and Thursday as well as alternate Saturday afternoons. The screenings on Tuesdays and those on Thursday afternoons will be subject to social distancing, with limited seats available, whereas those on Thursday evenings and Saturday afternoons will have all seats available. We will be familiarising our wonderful stewarding volunteers in the amended ways of working that this will entail over the coming weeks.

Unfortunately, we will have to delay the reintroduction of some aspects of the David Lean that you will have got used to. There will be no walk up box office before shows – tickets will need to be booked online and in advance of screenings. The Arts Bar will not be open (we hope to commence this in the New Year). Babes in Arms and Dementia Friendly screenings will not be part of our initial programming.

During this period up to Christmas, we plan to show three titles over a fortnight, all of which will be available in socially distant and ‘full’ screenings. The films will be a mixture of titles that have opened earlier in the year and the best of the latest releases – hopefully something for everyone. More details next week.

We plan to give more detailed information about how we will be organising screenings on this website and via our newsletters – subscribe here. In the meantime, if you have any concerns or queries, do let us know via our contact form (opens in new tab). 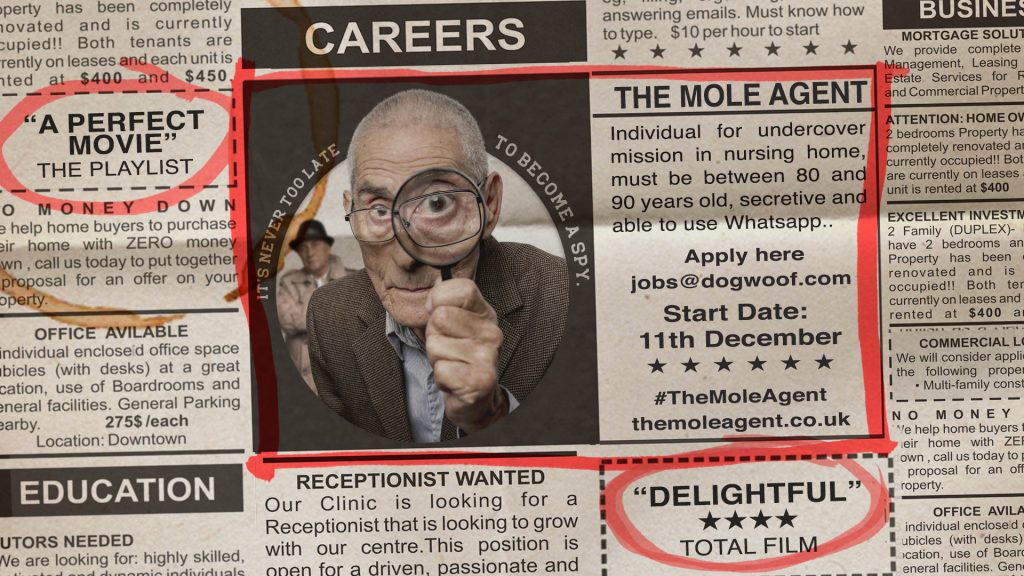 Our planned screenings for April are below. Tickets on sale from Thursday 05 March at 9am:

The April programme features a look back in history and the world from a different perspective.
* HOH = Hard of Hearing. These films are shown with subtitles to assist those with hearing loss.

Thurs 2nd Apr, 2.30pm & 7.30pm and Tues 14th Apr, 11am (Babes in Arms screening) – EMMA (U) – The Jane Austen classic comes to the screen as the clever and rich Emma Woodhouse must adventure through misguided matches and romantic missteps to find the love that has been there all along.

Tues 7th Apr, 7.30pm – WAVES (15) – Following the epic journey of a suburban African-American family, navigating love, forgiveness, and coming together in the aftermath of a loss.

Thurs 9th Apr, 2.30pm & 7.30pm – PORTRAIT OF A LADY ON FIRE (15) – Set in France in the late 18th century, the story of a forbidden affair between an aristocrat and a painter commissioned to paint her portrait.

Tues 14th Apr, 7.30pm – THE MAN WHO KILLED DON QUIXOTE (15) – Toby, a disillusioned film director, is pulled into a world of time-jumping fantasy when a Spanish cobbler believes him to be Sancho Panza. Directed by Terry Gilliam

Thurs 16th Apr, 2.30pm & 7.30pm – DARK WATERS (12A) – Based on a true story, a lawyer pursues a case against a chemical company that exposes a lengthy history of pollution.

Tues 21st Apr, 7.30pm – THE LIGHTHOUSE (15) – Two lighthouse keepers start to lose their sanity when a storm strands them on the remote island where they are stationed.

Thurs 23rd Apr, 2.30pm (HOH) & 7.30pm – MILITARY WIVES (12A) – With their partners away serving in Afghanistan, a group of women on the home front form a choir, finding themselves a media sensation and global movement.

Tues 28th Apr, 7.30pm – LITTLE JOE (12A) – Single mother Alice is engaged in developing new species. Against company policy, she takes one home as a gift for her teenage son, Joe, with strange results.

Our planned screenings for March are below. Tickets on sale from Thursday 6 February at 9am:

Tue 3 Mar at 7.30pm – BE NATURAL: THE UNTOLD STORY OF ALICE GUY-BLACHE (12A) – Documentary about the woman believed to be the first female film director, forgotten by history.

Thu 5 Mar at 2.30pm and 7.30pm & Tue 10 Mar at 11am Babes in Arms screening – THE PERSONAL HISTORY OF DAVID COPPERFIELD (PG) – Armando Iannucci writes and directs Charles Dickens’ tale of the title character, moving from his youth into adulthood.

Tue 10 Mar at 7.30pm – UNCUT GEMS (15) – Adam Sandler plays a New York jeweller living on the edge as he makes a series of high-stakes gambles searching for the ultimate win.

Thu 12 Mar at 2.30pm and 7.30pm – HONEY BOY (15) – Shia LaBeouf wrote the script and plays his own father in a barely fictionalised account of his troubled childhood, rise to stardom and descent into addiction and rehab.

Tue 17 Mar at 7.30pm – WEATHERING WITH YOU (12A) – Japanese anime, the highest grossing film in Japan in 2019. A high school student runs away to Tokyo, where he falls for a girl who seems to be able to control the weather.

Sat 21 Mar at 1.30pm – A HIDDEN LIFE (12A) – A story of Austrian Franz Jägerstätter, a conscientious objector who refused to fight for the Nazis in World War II..

Thu 26 Mar at 2.30pm (HOH) and 7.30pm – A BEAUTIFUL DAY IN THE NEIGHBOURHOOD (PG) – Tom Hanks plays children’s TV entertainer Fred Rogers, who is interviewed by a sceptical magazine journalist, who has troubles of his own.

Tue 31 Mar at 2.30pm and 7.30pm – PARASITE (15) – (Korean with English subtitles) – Award-winning dark comedy about the poor Kim family who integrate themselves into the much richer Park family home.

Our planned screenings for February are below. Tickets on sale from Thursday 9 January at 9am:

Tue 4 Feb at 7.30pm – HARRIET (12A) – The story of Harriet Tubman, who escaped her own enslavement as well as helping other slaves and changing the course of history.

Thu 6 Feb at 2.30 & 7.30pm – ORDINARY LOVE (12A) – Liam Neeson and Lesley Manville star as middle-aged couple, Joan and Tom. They find their love and devotion tested when Joan is diagnosed with breast cancer.

Tue 11 Feb at 11am Babes in Arms screening Thursday 13 Feb at 2.30pm (HOH) and 7.30pm – LITTLE WOMEN (U) – Louisa May Alcott’s classic novel is brought to the big screen, as four sisters come of age in America in the aftermath of the Civil War.

Tue 18 Feb at 7.30pm – JOJO RABBIT (12A) – Satirical black comedy. A Hitler Youth member finds out his mother is hiding a Jewish girl in their attic. He must then question his beliefs, while dealing with the intervention of his imaginary friend, an idiotic version of Adolf Hitler.

Thu 20 Feb at 2.30pm and 7.30pm – CATS (U) – Tom Hooper directs, as Andrew Lloyd Webber’s musical is remade for film. James Corden, Judi Dench, Idris Elba, Jennifer Hudson and Ian McKellen play a tribe of cats called the Jellicles must decide yearly which one will ascend to the Heaviside Layer.

Sat 22 Feb at 1.30pm – SO LONG, MY SON (12A) – (Mandarin with English subtitles) – Two married couples adjust to the vast social and economic changes taking place in China from the 1980s to the present.

Tue 25 Feb at 7.30pm – BLUE STORY (15) – Shy Timmy from Deptford and charismatic Marco from Peckham become firm friends but find themselves on rival sides in a gang war in which there are no winners, only victims.

Thu 5 Mar at 2.30pm and 7.30pm – THE PERSONAL HISTORY OF DAVID COPPERFIELD (PG) – Armando Iannucci writes and directs Charles Dickens’ tale of the title character, moving from his youth into adulthood.

Our planned screenings for January are below. Tickets on sale from Thursday 5 December at 9am:

The January programme sees sees world cinema and a trip back in time.

Thu 2 Jan at 2.30pm (HOH) and 7.30pm – THE GOOD LIAR (15) – Conman Roy Courtnay targets his latest mark: the recently widowed and rich Betty McLeish. What should have been a simple swindle, though, leads to a cat-and-mouse game.

Tue 7 Jan at 7.30pm – SORRY WE MISSED YOU (15) – Ken Loach directs the story of Ricky and his family, struggling on zero hour contracts. The family unit is strong but money brings them to breaking point.

Thu 9 Jan at 2.30 & 7.30pm – THE REPORT (15) – FBI agent Daniel Jones performs an exhaustive investigation into the CIA’s use of torture on suspected terrorists.

Tue 14 Jan at 11am – Babes in Arms screening plus Thu 16 Jan at 2.30 (HOH) & 7.30pm – THE AERONAUTS (PG) – The story of scientist James Glaisher and wealthy young widow Amelia Wren, mounting a balloon expedition to fly higher than anyone in history.

Sat 18 Jan at 1.30pm – THE IRISHMAN (15) – In the 1950s, truck driver Frank Sheeran gets involved with a Pennsylvania crime family. As he becomes a top hit man, he works for Jimmy Hoffa – a powerful Teamster tied to organized crime.

Tue 21 Jan at 7.30pm – THE LAST BLACK MAN IN SAN FRANCISCO (15) – A young man and his best friend search for home in the changing city that seems to have left him behind.

Thu 23 Jan at 2.30 & 7.30pm – LA BELLE EPOQUE (15) – French romantic comedy. Finding his marriage on the rocks, Victor meets Antoine, the owner of a company which allows people to perform a version of “time travel”, allowing Victor to take his wife back to the start in hopes of rekindling his love for her.

Mon 27th Jan at 7.30pm (Holocaust Memorial Day) – THE BIRTHCATCHER (15) – A young woman in Norway flees the Nazi roundup and conceals her identity while working on an occupied farm.

Tue 28th Jan at 7.30pm – BY THE GRACE OF GOD (15) – Living as a family man in Lyon, Alexandre faces repressed memories as he’s confronted by the priest who abused him when he was a boy scout.

Thu 30th Jan at 2.30 (HOH) & 7.30pm – KNIVES OUT (12A) – A detective and a trooper travel to a lush estate to interview the quirky relatives of a patriarch, who died during his 85th birthday celebration.

Our planned screenings for December are below. Tickets on sale from Thursday 7 November at 9am:

Tue 3 Dec at 7.30pm – 2040 (PG) – Award-winning director Damon Gameau explores what the future would look like by the year 2040 if we embraced new approaches and solutions to global warming.

Thu 5 Dec at 2.30 & 7.30pm – The Peanut Butter Falcon (12A) – A young man with Downs syndrome escapes from an assisted living facility, finding a friend in a wayward fisherman on the run.

Tue 10 Dec at 11am Babes in Arms screening – Judy (12A) – Renee Zellweger stars as legendary performer Judy Garland as she arrives in London in the winter of 1968 to perform a series of sold-out concerts.

Tue 10 Dec at 7.30pm  – Chained for Life (15) – Croydon born Adam Pearson plays Rosenthal, a disfigured actor who finds his beautiful actress co-star struggles to connect with him. Adam joins us for a Q&A after the film.

Thu 12 Dec at 2.30 (HOH) & 7.30pm – Official Secrets (15) – An all-star cast of Keira Knightley, Ralph Fiennes and Matt Smith take part in the story of the lead up to the Iraq war of 2003 and how a British intelligence expert was forced to make a drastic decision.

Tue 17 Dec at 7.30pm and Thu 19 Dec at 2.30pm (HOH) – Last Christmas (12A) – Unlucky Kate accepts a job as a department store elf during the Christmas holidays but her luck seems to turn when she meets Tom, who also works there.

Thu 19 Dec at 7.30pm – Monos (15) – (Spanish with English subtitles) – Colombian drama about eight teenaged guerillas with guns watching over a hostage. As they run amok in the jungle, disaster strikes when the hostage tries to escape.

Mon 30 Dec at 2.30pm – Gosford Park (15) – Winning Julian Fellows the Oscar for Best Original Screenplay, the film is set in the 1930’s, with a group of pretentious rich and famous together for a weekend of relaxation at a hunting resort. When a murder occurs, each one of these interesting characters becomes a suspect. 35mm screening.