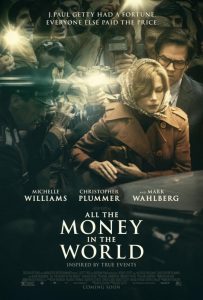 Kidnapped on a Rome evening in 1973, the fate of 16-year-old Paul Getty fascinated the world’s media and pushed his mother Gail (Williams) into the spotlight. His grandfather John Paul had ‘all the money in the world’ yet refused to pay the ransom, forcing his adviser Fletcher (Wahlberg), Paul, Gail and the kidnappers towards a potentially deadly endgame. Famously reshot with Plummer replacing Kevin Spacey as the cold-blooded tycoon, this tense drama weighs up the relative value of
money and family.