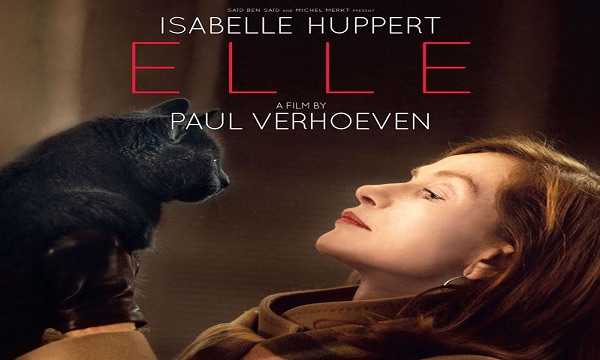 Our fastest-selling Cert. 18 film so far.  An extra screening has been arranged for Monday 8th May @ 7.30pm

Michèle (Huppert, Oscar-nominated) is the head of a leading video game company, and brings a hard-headed attitude to both her personal and business lives.

Attacked in her home by an unknown assailant, she seems at first to be little affected.  Eventually, however, Michèle resolves to track the man down, with unforeseen consequences…

Verhoeven casts an unsettling spell, varying the mood from scene to scene, in this widely praised, “electrifying and provocative comeback” (The Guardian).

At the time of first publication of this page Elle had not yet been released in the UK, so here is the Review from The Guardian at the time of it’s debut at Cannes.

The Guardian review does not include a link to a trailer (though there is a link to an interview with the star).  The US release “official” Trailer, can be seen below – viewer advisory, the trailer gets an “R” rating – this IS Verhoeven and IS an 18 in the UK… [fvplayer src=”https://youtu.be/gM96ne-XiH0″]