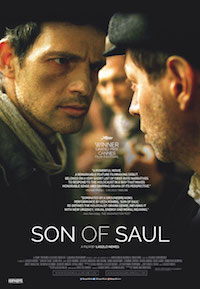 The 2016 Best Film in a Foreign Language Oscar and Golden Globe winner, this is an experience not to be missed.

Hungarian filmmaker László Nemes has created what feels like a new cinematic language to tell this hyper-focused story of a Jewish prisoner working for the Nazis (aka a Sonderkommando) called Saul (Géza Röhrig), at the Auschwitz-Birkenau death camp in October 1944. We rarely leave Saul’s point of view, creating the feel of one long tracking shot.

Early on, Saul spots a dying boy surrounded by Nazi doctors who he believes to be his son. Finding a Rabbi to arrange a proper burial becomes Saul’s obsession, and perhaps a way to keep his mind from the monstrous daily tasks he is forced to commit by the Nazi soldiers.

Very confronting, but anyone with even a passing interest in Holocaust cinema needs to see this extraordinary film. (Subtitles)

More a discussion than a Review from the Guardian (the video link is to the Trailer for ‘Night Will Fall, last year’s HMD presentation at the David Lean): review