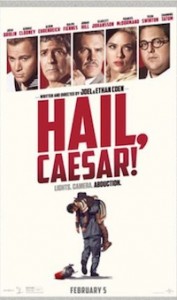 This is a Babes In Arms screening.

This ode to classic Hollywood cinema stars Brolin as Eddie Mannix, a film studio executive and problem solver, who faces his greatest challenge when dim-witted movie star Baird Whitlock (Clooney) is kidnapped while in costume for a swords-and-sandals epic. As well as being tasked with finding Whitlock, his latest assignments include a disgruntled director (Fiennes), a beautiful swimmer (Johansson) and a handsome dancer (Tatum).

While some critics don’t seem to rate it, this Guardian Review likes the film AND links to the official trailer: review & trailer link