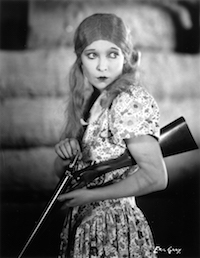 Winsome damsel-in-distress on screen and diva off screen, Mae (Benson) has tired of square-jawed co-star and husband Julian (Aherne), preferring debonair Andy (Calthrop), known to the public as a Chaplinesque clown. At first a hilarious, biting movie industry satire, Shooting Stars takes a darker turn when Mae schemes to escape her personal and professional crisis.

Not so much a Review, more a discussion of late 20s film at the London Film Festival: ‘review’

While there is (no longer) an official Trailer, BFI has put this clip on YouTube: ‘extract’