Tense midwife Claire (Frot) finds her settled routine turned upside down when her late father’s free-spirited ex-mistress Béatrice (Deneuve) turns up on her doorstep out of the blue.

Claire is furious when someone she has pigeonholed as a homewrecker asks for her help with money and health problems, yet the possibility emerges of a bond between these two very different women and a new start for Claire.

Both lead actresses shine, with Deneuve “vivid and supercharged” (The Telegraph).

Here is a link to a Review in The Hollywood Reporter written when the film was featured at the 2017 Berlin Film Festival.

So no Trailer available to the reviewer, but the ‘Official HD” version can also be seen below [fvplayer src=”https://youtu.be/S_FLOFTvqdQ”] 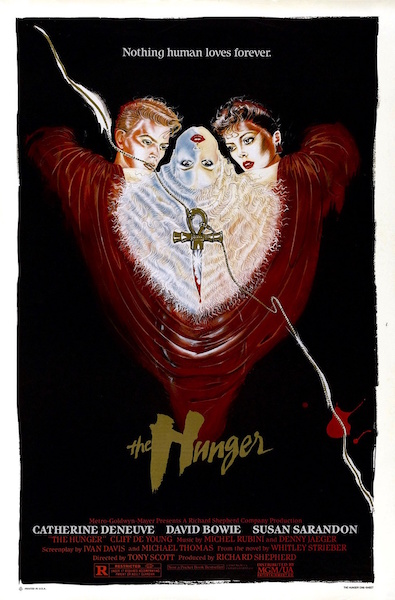 David Bowie was a versatile actor as well as a musical genius, and Scott’s horror-romance is a worthy and highly entertaining vehicle for his talents.

As the lover of vampire Miriam (Deneuve), John (Bowie) expects immortality – so is shocked when he suddenly ages. His gerontologist Sarah (Sarandon) is sceptical at first, but then finds herself drawn under Miriam’s spell…

The title sequence alone – intercut with Bauhaus’s Bela Lugosi’s Dead – is worth the price of a ticket.

Our Hallowe’en screening will also include a selection of 1980s horror trailers!

The original (1983) Review from The New York Times can be seen: here,

while the original (US) Trailer (which has not aged as well as the film) can be seen below…..