1972. Ron Stallworth arrives as the first African-American detective to serve in the Colorado Springs Police Department. Ambitious, and determined to make his mark, Stallworth embarks on a perilous mission: infiltrate and expose the Ku Klux Klan. After recruiting the seasoned Flip Zimmerman for the sting of the decade, together they work to thwart the extremist hate group’s efforts to appeal to mainstream America. Winning the Grand Prix at Cannes, and produced by Jordan Peele (Get Out), Spike Lee’s biographical dramedy tells the uncompromising story of an American hero. 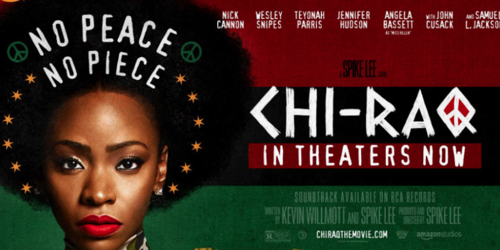 In gang-war ravaged Chicago, a stray bullet from a night of fighting leaves a young girl dead.

Based in part on the Greek classic Lysistrata, the women from the warring sides refuse their partners sex in pursuit of an end to violence – or, as chanted in the film, “No peace – no pussy” and “Save our babes”.

The nickname of Cannon’s gang leader, Chi-Raq, is a reference to the unfortunate statistic that in Chicago gang-war related homicides exceed the death toll among American Special Forces in Iraq.

This lengthy and effusive Guardian Review, here includes a link to the trailer

The (US) Trailer can also be seen below [fvplayer src=”https://youtu.be/rGTuuj-aTJs”]