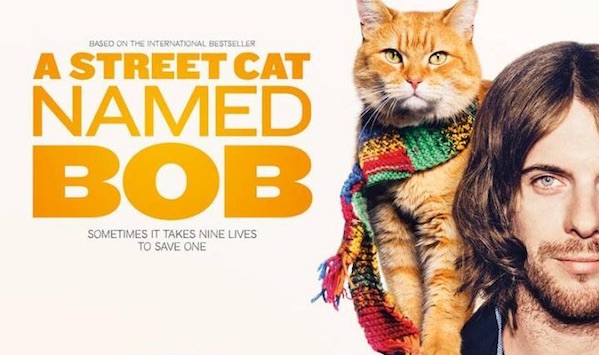 profits from the 2.30 screening will go to the Mayor’s chosen local charities: the Stanley People’s Initiative; Croydon Commitment; and The British Home.

In 2007, busker James Bowen was a recovering drug addict living in sheltered accommodation…

…when he came across an injured cat in his hallway. 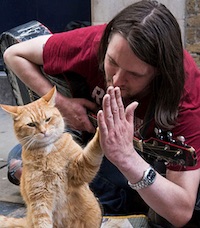 Struggling to even afford food for himself, James wasn’t exactly looking for a new companion, but decided to nurse the cat back to health anyway.  He quickly named him Bob – and that was the start of their unlikely friendship.

This heartwarming adaptation of Bowen’s best-selling memoir was filmed on location in Hackney and Covent Garden, and features the real-life Bob!

Notwithstanding blanket advertising on the side of buses and a lot of gossip column tittle-tattle about who was (nearly) wearing what at the premiere it has been hard to find a meaningful Review of this film in the press.  I’d kinda like to have sourced one from The Big Issue but theirs was a shameless self-promoting begging bowl (true, problems may have gone away for James but not for an increasing number of others so there is still work to be done).

So we default to the internet, here, including a trailer and a few other things,

or you can go straight to the Trailer: