Sergio is a Chilean spy. Sort of. At least, he is offered the role of one after a casting session organized by Detective Romulo, a private investigator who needs a credible mole to infiltrate a retirement home. Romulo’s client, the concerned daughter of a resident, suspects her mother is being abused and hires him to find out what is really happening.
However, Sergio is 83, not 007, and not an easy trainee when it comes to technology and spying techniques. But he is a keen student, looking for ways to distract himself after recently losing his wife. What could be a better distraction than some undercover spy action? While gathering intelligence, Sergio grows close to several residents and realizes that the menacing truth beneath the surface is not what anyone had suspected.
Maite Alberdi’s The Mole Agent is a stylish combination of an observational documentary and a spy movie, with sleek camerawork and wonderfully watchable characters. It’s a unique meditation on compassion and loneliness that will infiltrate your heart and never let go.
Spanish with English subtitles.

The David Lean Cinema shares a proportion of the £9.99 ticket price with the distributor. Watch at home now.
Available in your account for 28 days after purchase and for 48 hours after pressing play.
Distributor: Dogwoof – create account or login.
Film run ends on 02 April 2021.
An explanation of why you may need to have more than one account for streaming films that we promote is given here. 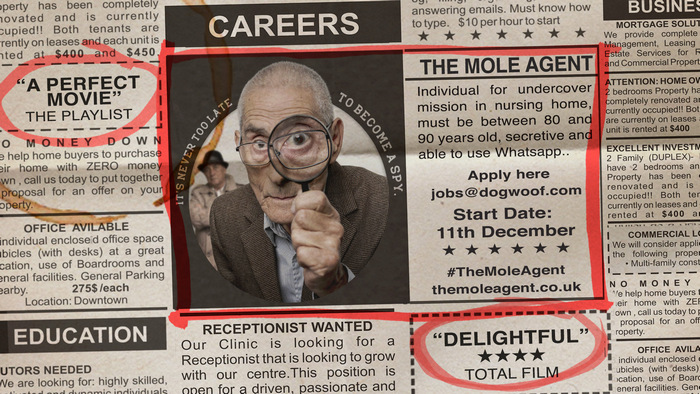