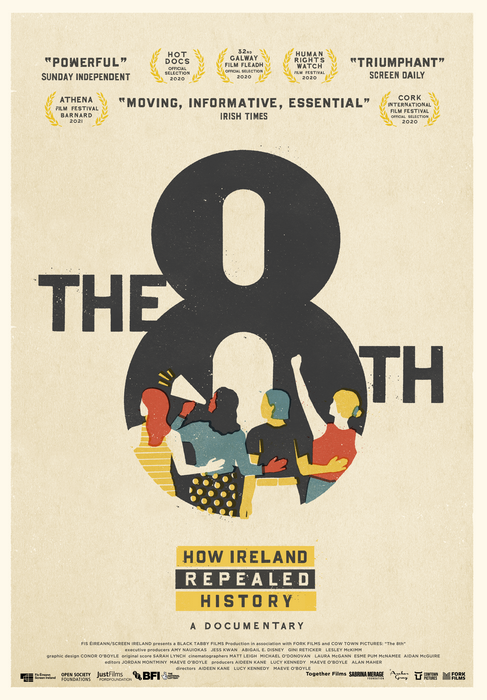 The 8th traces Ireland’s campaign to remove the Eighth Amendment – a constitutional ban on abortion. It shows a  country’s transformation from a conservative state in thrall to the  Catholic church to a more liberal secular society.
This includes voices from both sides of the debate, but its  primary focus is on the dynamic female leaders of the pro-choice  campaign. The film follows the veteran campaigner Ailbhe Smyth and self-described glitter activist Andrea Horan as they chart a bold strategy of grassroots  activism and engineer the near impossible. This dramatic story is  underscored by a vivid exploration of the wrenching failures that led to this defining moment in Irish history.
An urgent narrative, a cautionary tale and a roadmap for  progressive reforms in a modern era where authoritarianism is on  the rise, The 8th shows a country forging a new progressive path at  a time when reproductive rights are threatened around the world.
This film contains flickering or flashing lights that may affect those with photosensitive epilepsy.
Distributor : Together Films
Associated Q&A’s are available on various dates, see below…….

Q&As on various associated subjects (free participation) are arranged for the following dates – Click on links below to reserve your place:
Wed 26 May 2021 at 7.30pm – Care and Compassion for Irish Women in Crisis: Celebrating the UK Support Networks
Thu 27 May 2021 at 8.30pm – Activating with Joy and Throwing Glitter on an Issue
Tue 01 June 2021 at 7.30pm – The Power of Protest: What We Can Learn From the Victorious Irish Abortion Campaign
Thu 03 June 2021 at 7.30pm – Global Reproductive Rights Activism: Building Solidarity