BY THE GRACE OF GOD

Francois Ozon’s gripping true-life drama tells the story of three men who come together to dismantle the code of silence around historic abuse cases within the Catholic Church. Alexandre (Melville Poupaud) lives in Lyon with his wife and children. One day he learns by chance that the priest who abused him when he was in scouts is still working with children. He decided to take action and is soon joined by two other victims of the priest, François (Denis Ménochet) and Emmanuel (Swann Arlaud). They band together to “lift the burden of silence” surrounding their ordeal. But the repercussions and consequences will leave no one unscathed. Based on events from the 2019 conviction of Cardinal Philippe Barbarin of Lyon for concealing the conduct of Father Bernard Preynat, By The Grace Of God is an urgent portrait of resistance.

Young Parisienne Chloe (Vacth) consults psychiatrist Paul (Renier), and they fall in love. He’s cagy about his past, and Chloe discovers his unacknowledged twin Louis (Renier again), also a psychiatrist but otherwise very different. Chloe’s confusion about the brothers’ true characters mounts, with Ozon channelling Hitchcock, De Palma and the deliciously twisted psychosexual style of his earlier Swimming Pool. Conjuring a world full of mirrors, cats, contradictions and double identities, this playful, sensual thriller will be hugely enjoyable – if you relish a trip to the dark side!

[fvplayer src=”https://youtu.be/xqVGWGG9J5Y”]
Plus a BRIT School Showcase film, screened in partnership with the School’s Film & Media Production department. During this month we are showing JAB (12A) (2’31”), directed by Theo Batterham. This was Theo’s first film, and his aim was to portray a sense of tension. 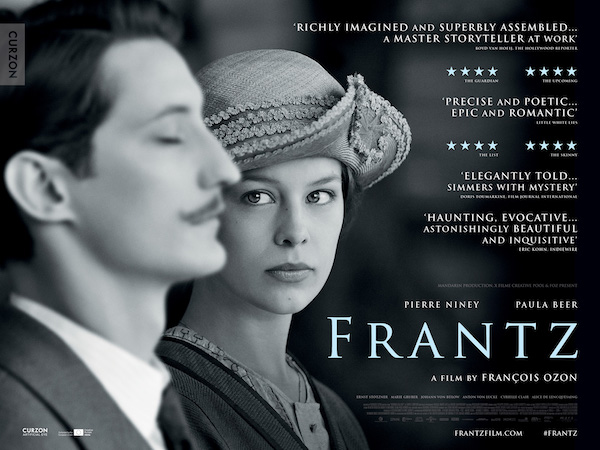 Part romance, part detective story, this sumptuous film from Ozon (8 Women, Potiche) is set in 1919 in the aftermath of The Great War, with all its bitterness, grief and prejudice. 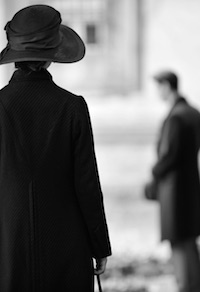 In a small German town, the death of young soldier Frantz is mourned by his parents and fiancée Anna (Paula Beer).

When mysterious and charming Frenchman Adrien (Pierre Niney) appears at his graveside, a path to reconciliation opens, leading Anna to Paris and culminating in a gloriously luminous ending.

Here is a link to a deeper Review from The Guardian – dating from the film’s debut at the Toronto International Film Festival in 2016.  This contains links to both the (TIFF) trailer for ‘Frantz’ and a brief clip from ‘Broken Lullaby’.

This Review from The Telegraph is more recent, dating from the film’s UK release, but is similarly deep and analytical, seeing Ozon’s retelling as an homage to Hitchcock’s ‘Vertigo’.

Both reviews include a link to the ‘official’ (American / Tiff)  Trailer, which can also be seen below [fvplayer src=”hhttps://youtu.be/dv6NJunxRQQ”]